When will the next recession be?

When will the next recession be?

The most frequent question economists hear these days is: When will the next recession be?

After 10 years of growth, many people believe a recession is inevitable. The growing level of uncertainty in the global economy and the choppy performance of the stock market have contributed to the unease.

However, recessions don’t happen just because the economy has been growing for a decade. Looking back at past economic cycles in Canada, we see that recessions have been caused by either aggressive interest rate hikes or by some sort of a shock to the economy.

So, are we going into a recession, or is the economy headed for a soft landing?

Learning from the past four recessions

The first one, in 1981, was caused by a sharp increase in interest rates. When the inflation rate hit 12%, the Bank of Canada responded by boosting rates to 19%. The strategy worked; inflation subsided, but the high interest rates caused a serious recession.

In 1991, the culprit was a spike in oil prices, causing a worldwide recession. More recently, a housing bubble in the United States created a financial crisis in 2007-08 that was followed by another serious global recession. Finally, a 60% plunge in oil prices in 2014 sent Canada into a six-month recession.

With inflation under control, interest rates will remain low

As we have seen, recessions are caused by significant rounds of interest rate hikes or by a shock to the economy—most recently depressed oil prices or financial imbalances. What will cause the next recession?

Over the last two years, interest rates have been increasing but at very modest pace by historical standards. Indeed, as we can see in the second graph, inflation is currently below 2%. This is good news! It means there is no pressure on the Bank of Canada to significantly boost interest rates to control inflation.

With no inflationary pressure, the bank can continue to increase rates in keeping with the economy’s growth prospects. Currently, the economy is gearing down, and the Bank of Canada has responded by slowing the pace of its rate increases.

The risk of sharply higher inflation is low, and therefore, we can expect interest rates to remain relatively stable. On this front, there is no reason to believe a recession is in the offing.

The threat of oil shocks

As mentioned above, two of the last four recessions in Canada were caused by an oil shock. However, Canada’s vulnerability to sharp price drops is smaller today because the oil sector’s share of investment in the economy is half of what it was in 2014.

Moreover, oil prices have been recovering from their most recent fall and are expected to continue to rise in 2019.

Is there a danger from financial imbalances?

Financial imbalances caused by over-valued assets can also provoke a recession. The significant increase in housing prices in Canada over the last decade created imbalances in different parts of the country, especially in Toronto and Vancouver.

Consequently, the consumer debt ratio of Canadians has increased significantly. With interest rates rising, Canadians are spending more of their income to repay interest, and this has the effect of reducing their spending on other things.

Still, higher interest rates and new federal regulations intended to cool the housing market, particularly in Vancouver and Toronto, have had their effect. The Canadian housing market is rebalancing, and so far, it has been a soft landing.

The economy is slowing, but no sign of a recession

A look back at the last four decades of Canadian recessions suggests that several of the most important causes are less threatening today.

After ten years of growth, inflation is under control, easing pressure for higher interest rates. Oil prices have improved and should continue to increase slowly in 2019. And housing prices in once-hot markets are moderating after years of significant growth.

These positive factors should help the economy keep growing this year and assuage the recession fears of Canadians.

On June 1, 2017, the Ontario government introduced legislation to amend Ontario’s Employment Standards Act, 2000 (the “ESA”) and the Labour Relations Act, 1995.Read more here on The Fair Workplaces, Better Jobs Act, 2017 (the “Act”), builds on the Changing Workplaces Review Final Report which was released on May 23, 2017 after two years of consultations, [...]

Once you've decided to start a new business, it's very common to jump in with both feet and,as Michelle Romanoff from  Dragons Den suggests,  just "do it".  Unfortunately, unless you do some important initial ground work at the beginning, you could be in for some major headaches, or worse, later on.Read more

How to evaluate a potential business acquisition

If you have decided on buying an existing business, the most important next step is determining what that business is worth.  You as the buyer is hoping to acquire the business with as little financial outlay as possible.  The seller, on the other hand, is hoping to sell the business for as much as possible [...]

Why and How to write a Business Plan

A Business plan is your road map of where you want your business go to, and how you're going to get there.  Not only do you need this map, but so does your lenders, shareholders and potential investors.  The Business Plan can not reside in your head.  It needs to be set out clearly in [...]

One of the most basic, and critical, needs of all new businesses is money.  How you get it, where to get it, who you get it from, how long you have it and how you back it back are fundamental, and befuddling, considerations.  Here are some ideas for 7 potential sources for start-up financingRead more 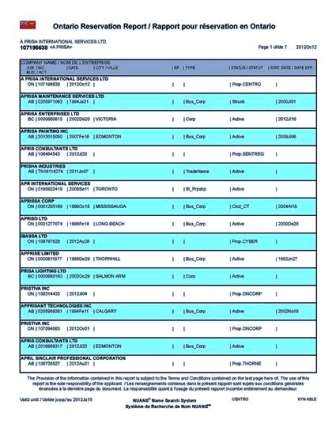 A little history about NUANS searches....and a cautionary tale

Back in the day, early 1983 to be exact.... when 3 of us were trying to get the Name Search department started at Dye & Durham, what to charge for a NUANS Name Search was our first big question.For decades (since 1885), Dye & Durham and it’s nemesis, Newsome and Gilbert, had been the sole providers of Corporate and Legal supplies [...]

The Dangers in not keeping an up to date Minute Book

More and more new entrepreneurs are willing to take the chance in not creating (and keeping updated) a corporate minute book.  This is a dangerous game of corporate russian roulette. Read this article by Peter Welsh for more information on the possible repercussions

Tips for Creating a Strong Team

Running a successful business and creating a strong team can be a lot like establishing and following a good workout regime. As a leader, it's your job to function as a personal trainer to inspire your team to get on board with your brand vision and coach them in successfully carrying that vision out.Here are seven [...]

Meet the W100!--this years top female business owner/operators of  Canadian Companies (and while you're reading about, and praising their accomplishments, check out their companies..It might give you some ideas for your new business!Read here